Latin name:
Phascolarctos cinereus
(Greek: phaskolos means pouch; arktos means bear. Latin: cinereus means ash-colored.)
Koalas are marsupials, females having a pouch in which their young first develop. Their pouch faces the rear and has a drawstringlike muscle that the mother can tighten. They are the sole member of the family Phascolarctidae.


Fur:
The fur of the koala in southern region is thick and woolly and is thicker and longer on the back than on the belly. Koalas in northern region have a short coat; this gives them a naked appearnace. The color and pattern of the coat varies considerably between individuals and with age.


Coat:
Thickest of the marsupials. Gray to tawny: white on the chin, chest, and forelimbs. Rump consists of tougher connective tissue dappled with white patches. Fluffy ears with longer white hairs. Coat is shorter and lighter in color toward northern regions. 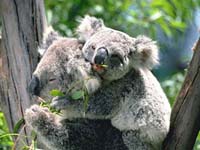 There were once several different kinds of koala - all but one of which had died out. The earliest known member of the koala family was a browser, which lived 15 millions years ago. Evidence of a 'giant' koala, twice the size of its modern descendant, exists in fossils dating back more than 40,000 years. The sequence of koalas in the fossil record: From: Koala Handbook by Simon Hunter

History of the name: "koala"
In their history of the koala, Tom Iredale and Gilbert Whitley (1934) suggest that the common name "koala" was derived from an Aboriginal dialect of eastern New South Wales. Ronald Strahan (1978) lists cullewine, koolewong, colo, colah, koolah, kaola and koala as published dialectal variations of the name in that region, "complicated by problems of transliteration and printers" errors.

The early settlers referred to koalas as sloths, monkeys, bears, and even monkey bears, adopting the unfortunate practice of transposing the names of animals which were already familiar to Europeans to Australian lookalikes. The virtual absence of a tail, together with their stocky build and their relatively long legs, gives the koalas a bear-like appearance, and undoubtedly led to their being referred to as, "koala bears", or, "native bears".

From: The Koala: A Natural History by Anthony Lee & Roger Martin 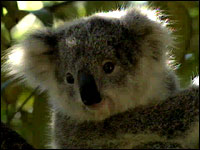 From: The Koala: A Natural History by Anthony Lee & Roger Martin

From: Koalas - Australia's Ancient Ones by Ken Phillips 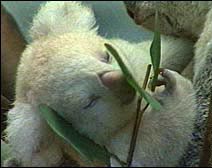 From: Koalas - Australia's Ancient Ones by Ken Phillips 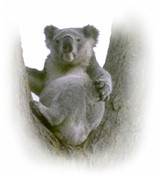